As one of the longest-serving members of City’s academic staff, Professor Finkelstein played a vital role in the development of both the University and the individuals associated with it – his personal kindness towards colleagues and students has been credited as the spark that sent countless young engineers on to distinguished careers.

Professor Finkelstein was born in Lvov, Poland and was deported to the Ukraine by the Soviets in 1941. He came with his family to the UK after the war and, having worked in the electronics and mining industries, joined City’s predecessor, the Northampton College of Advanced Technology, in 1959.

He went on to establish the institution’s pioneering Measurement and Instrumentation Centre, which still exists to this day, and become Dean of the School of Engineering. As City gained university status in 1966, Professor Finkelstein was pivotal to its growth, serving as Pro-Vice-Chancellor.

Although Professor Finkelstein retired from full-time employment in 1993, he maintained strong links with the University, continuing to engage in research, while completing an MA and PhD in religious studies at Leo Baeck College London. His two sons also enjoyed a close relationship with City – Anthony as a former computer science academic and Daniel as an alumnus and Honorary Doctor.

Professor Finkelstein’s contribution to measurement and control led to numerous distinguished honours. He was a Fellow of the Royal Academy of Engineering (FREng); received achievement awards from the International Measurement Confederation, the Institute of Measurement and Control, and the Worshipful Company of Scientific Instrument Makers; and was appointed as an Officer of the Order of the British Empire (OBE) in 1990. He also held an Honorary Doctorate from St Petersburg’s Technical University . 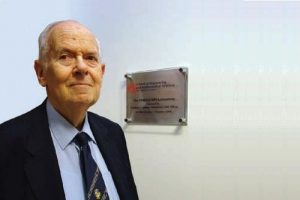 To celebrate his 80th birthday and 50 years of service, City named a new bursary fund and electrical engineering laboratory in Professor Finkelstein’s honour in 2009. The University hopes that this fund and facility will continue

Professor Finkelstein’s legacy as one of its most-respected academics, supporting the education of future generations of engineers and recognising his remarkable achievements.

You can read a full account of Professor Finkelstein’s life and work in his own words here.